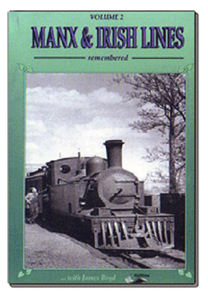 Though better known as chronicler of the Welsh narrow-gauge, James Boyd's earliest acquaintance with the genre was in Ireland and the Isle of Man, and this, indeed, is where his deepest affection remains. From the late 1940s James Boyd made many expeditions to these romantic destinations with his cine camera, recording a railway scene that, just as in mainland Britain, was soon to be lost for ever.

This video begins in the Isle of Man - Mr. Boyd's childhood holiday haunt- where, well after the Second World War, the 3ft gauge railway system still boasted an intensive timetable: not only for summer tourist traffic (at that time still unaffected by cheap foreign holidays), but also a year round, workaday service for the Islanders and their goods, sparsely used by then, but still very much a fully timetabled operation. Moving to Ireland, Mr. Boyd travels the 3ft gauge County Donegal, Lough Swilly and Cavan and Leitrim systems in their declining years, by passenger and goods service.

A broad gauge journey behind steam to the far south west, itself a classic collector's item, includes, amongst other gems, a footplate trip on the remote Valentia Harbour Branch, and finally, on the 3ft gauge once more, comes an unforgettable ride on the legendary Tralee and Dingle. Introduced and narrated by James Boyd himself, this video programme brings to today's enthusiast a scene coveted by many, experienced by few and recorded on film by even fewer. Through their remoteness, their antiquated equipment, and their sheer nostalgia, the lines he travels continue to exert a fascination unique in railway lore.

'Well worth collecting, even for those not of a narrow gauge persuasion.' (Railway World) 'Excellent commentary... This video is not just about the little railways that have vanished forever, it is also about a way of life which, sadly, seemed to vanish with them.' (Railway Magazine) 'Highly recommended.' (IOMSRA Magazine) 60 mins