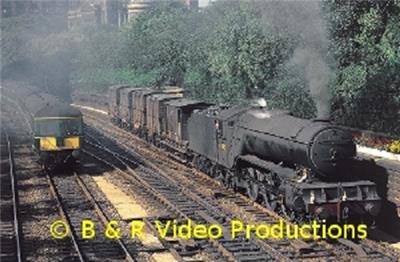 In this sixth part of our series, we cover the lines around the Scottish Lowlands, the Borders area and the South West.

We begin with steam and diesel activity at Edinburgh Waverley including a visit to St.Margaret’s Shed.
North of the Border, regular Easter features were the “Scottish Rambler” rail tours. In 1963 these were jointly organised by the Stephenson Locomotive Society and Branch Line Society. It gave an opportunity to travel over branch lines that had lost their passenger service years earlier.

On Easter Sunday, 14th.April 1963, we visit Reston to Duns, Tweedmouth to Wooler and the Coldstream, Roxburgh, Jedburgh and Greenlaw lines.

Two strategic routes that are sadly no longer with us were the Waverley Route from Edinburgh to Carlisle and the Port Road from Dumfries to Stranraer. We feature footage along both lines.

Also included are the branches to Lockerbie, Kirkcudbright, Whithorn and Garlieston. In the middle of the Galloway Moors we visit the lonely passing place of Loch Skerrow with no road access and the impressive “Big Water of Fleet” viaduct.

Coal traffic was thriving around Newton-on-Ayre and we also visit the NCB steam operated system at Waterside.

All the archive film used is mainly in colour and was filmed between 1963 and 1966. Motive power seen varies from ex-Caledonian and ex-North British types through to BR Standards. We even include the last ever passenger working with a Caley “Jumbo” 0-6-0!

A detailed commentary and authentic sound track completes a nostalgic look at the railways of Southern Scotland.